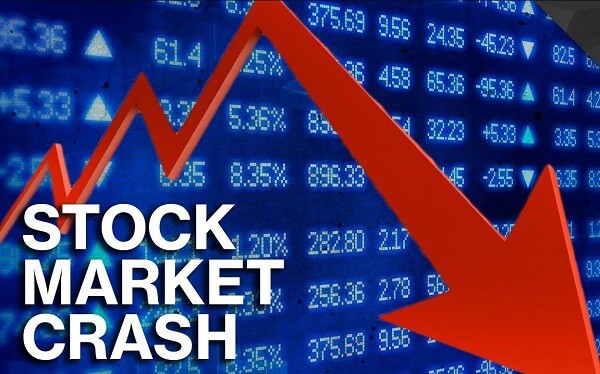 .  This section seems relevant in light of recent turbulence.

In the case of a stock market crash, your actual losses will depend on what you do next.

Imagine Aida and Thad both invest $100,000 in the share market, in a broad and identical way.  There’s a terrible, 30% downturn across the board and the value of their investments declines to $70,000.  Oh, no!  What are they to do?

Foolish Aida says, “This share market caper is a scam.  I’m getting out and putting all my money under the mattress.”  She sells her shares, gets $70,000 for them, and suffers a loss of $30,000.  Poor Aida!  Most real-life losses on the share market happen exactly like this – people sell their shares at a loss either through fear or necessity.  It is what eventuated during the Great Depression and it is what will continue occurring even once we’re living in bubble houses on Pluto after the Sun expands into a red giant.  Human beings tend to make the same old mistakes over and over again.

Clever Thad, on the other hand, doesn’t react so hysterically to the same situation.  He plans to hold the shares for at least another ten years anyway, and always knew there would be bumps along the way.  He leaves all his money in the stock market, ignoring the screeching news on TV and the mass panic of online forums, and instead focuses his attention on fixing up his Datsun 240Z.

The value of the market continues to slide, and now Thad’s shares are worth only $60,000.  Perhaps Aida was lucky to get out before that happened . . . or was she?

Still Thad does nothing.

After two years, the decline turns around, and after five years his shares are back where they started, at $100,000.  Over the next five years there is a new, moderate bull run and the value of his shares reaches $160,000.  By this time Thad is nearing retirement so he no longer has enough time to wait out downturn risk, so he starts gradually moving his money from shares over to bonds.

While Aida lost $30,000 in that recession, Thad suffered no loss and ended up making a total return of $60,000 ten years later.  To be fair, inflation means that amount won’t be worth what it would have been ten years ago, and he’ll have to pay some tax, but the point remains: you only suffer a loss on shares that decline in value if you sell them.  If you leave them alone, it might not matter.

This is known as a ‘paper loss’ versus a ‘realized’ or ‘crystalized loss’.  Thad only suffered a paper loss because he never sold the shares at their reduced value.  Aida realized the loss because she did sell.

If Aida did not understand how shares work, or needed the money sooner than ten years, or if she just couldn’t resist the urge to panic, then she should never have bought those shares in the first place.

This is why there is no one-size-fits-all template for investing.  Whether or not you should buy shares, and how many, depends on your individual circumstances.  There is no alternative but to understand how shares work and make the best choice for yourself.

Keep in mind the way bear markets play out in real life: the market falls dramatically one day, but nobody knows what will happen next.  It might bounce back up, or it might fall again.  Imagine watching the market fall and fall . . . fifteen percent down . . . the next month, twenty percent . . . the next two months, it goes up slightly . . . the following month, it falls precipitously again.  Over the last century, the market has taken anywhere from two months to three years to reach its bottom during a bear market and start a sustained climb back up.  Sometimes it dips again during this climb – you will have no idea whether it is going to crash way back down again or whether this is a blip.  It is a complete mystery.

Also in the real world, people don’t invest $100,000 on one occasion and then do nothing for years.  They work, save, and invest as they go along, often monthly.  In such a case, younger people can actually benefit from a market crash – they lose money (on paper) on their existing investment, but so long as they don’t panic and keep on investing regularly as usual, they will be picking up additional stocks at bargain-basement prices, which is great for the long-term growth of their wealth.

Are you picturing this situation?  Do you have what it takes to stay calm and carry on?

You should only buy shares if you are prepared to hold them for a long time.  If you can’t psychologically cope with paper losses, or if you will need the money for something in the near term, then avoid shares.  Which would be a pity, because they have fantastic growth potential in the long run.

I was visiting an historic fort with a friend, and as we walked along the 400-year-old, coral-brick parapet I mentioned in conversation that I’d lost about $10,000 that week in a stock market downturn.  My friend was astonished that I was so nonchalant about it.  I explained that it wasn’t a real loss.  I intended to keep that money in the stock market for many years to come, so it was a hiccup that I could ignore.  I was far more interested in the Spanish brickwork.

Some weeks I might ‘make’ $20,000.  Some years I might ‘lose’ $100,000.  It’s all on paper for the time being.  The trick is not to suddenly sell everything in a blind panic, which is what a lot of people do.  Know that downturns happen, expect them, and plan how you’re going to react when they occur.  The best reaction is to do nothing – or even to buy up some extra shares while they’re cheap, if you have the money available.

The stock market is the wild ride of investment categories.  It is the riskiest because stocks may suddenly lose value, and it is ‘volatile’ – the value goes up and down like a roller coaster, making some passengers suffer motion sickness.

To give you an idea, here are the annual returns from the S&P 500 (the index measuring the performance of the 500 biggest companies on the US stock exchange) over recent years:

You did notice those negative signs in front of some figures, didn’t you?  I bolded those to make sure you didn’t miss them.  This is the volatility of which we speak.

If you had invested $10,000 in the S&P 500 (an index of the largest 500 companies publicly traded in the US) in October 2007, your investment by October 2019 would be worth around $23,400.  Keep in mind that some of this will have been eaten by inflation.  That is not a very good result for such a long investing period.

On the other hand, if you invested the same amount a little later, in the depths of the crash around March 2009, it would be worth around $46,000 by October 2019.  Check this cool online calculator where you can figure out such examples for yourself.  The random swings of the market can make that much of a difference.  Remember, most normal and rational people would have been gradually investing both before and after the crash, which would even out these enormous discrepancies quite a lot.

The point here is not that you need to pick the right moment to invest, because unfortunately that is impossible.  The above examples are not a dumb guy and a smart guy, they are an unlucky guy and a lucky guy.  Holding shares over the long-term is a strategy that will probably work for everyone, smart and dumb, lucky and unlucky.