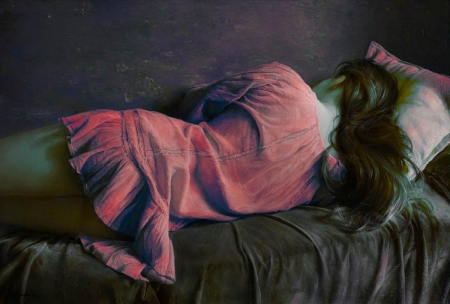 What a journey it has been!  And we’re not nearly done yet.

I’ve learned to appreciate the poetry that has no obvious meaning.  You could go looking for it, if you wanted to, or you could just enjoy it without trying to figure it out, as you would instrumental music.

Ode to a Nightingale

MY heart aches, and a drowsy numbness pains

My sense, as though of hemlock I had drunk,

Or emptied some dull opiate to the drains

One minute past, and Lethe-wards had sunk:

‘Tis not through envy of thy happy lot,

But being too happy in thy happiness, –

That thou, light-winge’d Dryad of the trees,

In some melodious plot

Of beechen green, and shadows numberless,

Singest of summer in full-throated ease . . .

This one seems to have a story to it but it is a little hard to follow.  Which is fine.  Here is the ending:

The Eve of St. Agnes

These lovers fled away into the storm.

That night the Baron dreamt of many a woe,

And all his warrior-guests with shade and form

Of witch, and demon, and large coffin-worm,

Were long be-nightmar’d.  Angela the old

The Beadsman, after thousand aves told,

For aye unsought-for lept among his ashes cold.

Sleep is a wonderful thing, and celebrated too seldom.  Come to think of it, why do we fear oblivion so much, when our daily mini-oblivion is so pleasant?  Well there are many reasons I guess, chief among them that we’d like to wake up again.  Anyway, this is the.  whole poem:

Shutting with careful fingers and benign

O soothest Sleep! if so it please thee, close,

In midst of this thine hymn, my willing eyes,

Or wait the amen, ere thy poppy throws

Around my bed its lulling charities;

Then save me, or the passed day will shine

Upon my pillow, breeding many woes;

Save me from curious conscience, that still lords

Turn the key deftly in the oiled wards,

And seal the hushed casket of my soul.

For anyone still awake, the next poet, Walter Savage Landor (1775-1864) completely blows away the myth of the short-lived poet.  In fact, I most like these two poems on the subject of growing old:

On His Seventy-Fifth Birthday

I STROVE with none; for none was worth my strife,

Nature I loved, and next to Nature, Art;

I warmed both hands before the fire of life,

It sinks, and I am ready to depart.

Well, ready or not, he still had a ways to go:

To My Ninth Decade

To my ninth decade I have totter’d on,

And no soft arm bends now my steps to steady;

She, who once led me where she would, is gone,

So when he calls me, Death shall find me ready.

Death didn’t wait long.  In fact the poem was a little premature and Wally fell off the perch at age 89.  Had he lasted longer we no doubt would have enjoyed further miserable poems variously bemoaning being 100, 110 and 200 years old.

Death Stands Above Me

DEATH stands above me, whispering low

I know not what into my ear;

Of his strange language all I know

Is, there is not a word of fear.

Easy for an old bloke to say.

Thomas Hood had the fortune, be it bad or good, to live for just 47 years (1798-1845).  Too few poems, I think, have been written about tasty whores who top themselves.  Tommy corrects the balance:

The Bridge of Sighs

No matter how coldly

Picture it, think of it,

Lave in it, drink of it,

As you’ve probably seen in the news, our Great poems for men series has caused quite an international shitstorm, with a vicious Twitter campaign launched, Michelle Obama making snide statements about me, and the Swedish Minister for Defense, Gender Diversity and Multicultural Affairs officially declaring me persona non grata, a ‘fascist cunt’, and a ‘stinky poo-poo head who’ll probably be the first one against the wall when the revolution comes’.

I need not inform my reader of my grievous offense: all poems hitherto included in the series have been written by, ugh, white men.  I tried to protest in my struggle session that some of them were probably poofters but that just made the shouting mob even angrier.  “Bu xing!  Bu xing!” they screamed, which I imagine means, “If your cock is as big as your chutzpah then I totally want to jump your bones, hunkalicious!”

I hereby apologize completely and without reservation for my unforgivable sin of omission.  I will henceforth attempt, in good faith, to do what little I still can to make up for my crimes and get myself repersoned.

Elizabeth Barrett Browning (1806-1861) was probably a man-faced blue stocking who didn’t shave her body hair or bathe regularly.  You can check for yourselves.

The poems so far today have been about sleep and death, and Lizzy puts them together.

There’s a psalm that says, “He giveth his beloved sleep”.  In other words, among the many blessings God grants us, one of them is that he lets us one day die.  She goes with it, and here we conclude for today:

OF all the thoughts of God that are

Along the Psalmist’s music deep,

Now tell me if that any is,

For gift or grace, surpassing this –

What would we give to our beloved?

A little faith all undisproved,

A little dust to overweep,

And bitter memories to make

The whole earth blasted for our sake.